candle
[candle]
See:
[BURN THE CANDLE AT BOTH ENDS],
[GAME IS NOT WORTH THE CANDLE],
[HOLD A CANDLE TO].

canned heat
[canned heat]  {n.}
Chemicals in a can which burn with a hot, smokeless flame.
Some people use canned heat to keep food warm.
The mountain climbers used canned heat for cooking.

canned laughter
[canned laughter]  {n.},  {informal}
The sounds of laughter heard on certain television programs that were obviously not recorded in front of a live audience and are played for the benefit of the audience from a stereo track to underscore the funny points.  […]

canned music
[canned music]  {n.}
Recorded music, as opposed to music played live.
"Let us go to a real concert, honey," Mike said. "I am tired of all this canned music we've been listening to."


cap the climax
[cap the climax]  {v. phr.}
To exceed what is already a high point of achievement.
Sam's piano recital was great, but Bill's performance capped the climax. 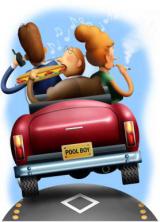 [car pool]  {n.}
A group of people who own cars and take turns driving each other to work or on some other regular trip.
It was John's father's week to drive his own car in the car pool.

card up one's sleeve
[card up one's sleeve]  {n. phr.},  {informal}
Another help, plan, or argument kept back and produced if needed; another way to do something.
John knew his mother would lend him money if necessary, but he kept that card up his sleeve.
* /Bill always  […]