cast down
[cast down]  {adj.}
Discouraged; sad; unhappy. — Used less often than the reverse form, "downcast".
Mary was cast down at the news of her uncle's death.
Charles felt cast down when he lost the race. 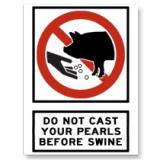 an expression "whose meaning is not predictable from the usual meanings of its constituent elements… or from the general grammatical rules of a language"
Recent updates
David Brown
Old wives don't die if they're getting alimony.
GOOD job
[GOOD job] A "Get-Out-Of-Debt" job. A well-paying job people take in order to pay off their debts, one that they will quit as  […]
leg man
[leg man] {n.}, {informal} 1. An errand boy; one who performs messenger services, or the like. * /Joe hired a leg man for  […]
longhair
[longhair] (1) 1. {n.}, {slang} A male hippie. * /Who's that longhair? - It's Joe./ 2. An intellectual who prefers  […]
big top
[big top] {n.} The main tent under which a circus gives its show; the circus and circus life. * /Lillian Leitzel was one of  […]
on schedule
[on schedule] (1) {adv. phr.} As planned or expected; at the right time. * /The school bus arrived at school on schedule./  […]
Brad Osberg
10 fingers...10 toes. Aw, crap! I'm metric!
Chainsaw Consultant
[Chainsaw Consultant] An outside expert brought in to reduce the employee head count, leaving the top brass with clean hands.