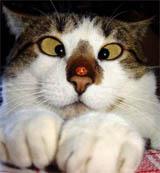 [catch one's eye]  {v. phr.}
To attract your attention.
I caught his eye as he moved through the crowd, and waved at him to come over.
The dress in the window caught her eye when she passed the store.

catch red-handed
[catch red-handed]  {v. phr.}
To apprehend a person during the act of committing an illicit or criminal act.
Al was caught red-handed at the local store when he was trying to walk out with a new camera he had not paid for.

catch sight of
[catch sight of]  {v. phr.}
To see suddenly or unexpectedly.
Allan caught sight of a kingbird in a maple tree.
Contrast: [LOSE SIGHT OF]. 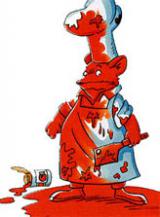 [catch up]  {v.}
1. To take or pick up suddenly; grab (something).
She caught up the book from the table and ran out of the room.
2. To capture or trap (someone) in a situation; concern or interest very much. — Usually used in the passive with  […]

catch-22
[catch-22]  {n.},  {informal}
From Joseph Heller's novel "Catch-22", set in World War II.
1. A regulation or situation that is self-contradictory or that conflicts with another regulation. In Heller's book it referred to the regulation that flight crews  […]

an expression "whose meaning is not predictable from the usual meanings of its constituent elements… or from the general grammatical rules of a language"
Recent updates
Fran Lebowitz
(1950--), Metropolitan Life, 1978. Food is an important part of a balanced diet.
CPL
[CPL] "Actually standing for CyberAthlete Professional League, the biggest [LAN] event, but has become an alternative to call  […]
carry the ball
[carry the ball] {v. phr.}, {informal} To take the most important or difficult part in an action or business. * /None of the  […]
make up
[make up] {v.} (stress on "up") 1. To make by putting things or parts together. * /A car is made up of many different  […]