[call down] also [dress down]  {v.},  {informal}
To scold.
Jim was called down by his teacher for being late to class.
Mother called Bob down for walking into the kitchen with muddy boots.
Compare:
[CALL ON THE CARPET],
[CHEW OUT],
[BAWL  […]

call girl
[call girl]  {n.},  {slang}
A prostitute catering to wealthy clientele, especially one who is contacted by telephone for an appointment.
Rush Street is full of call girls.

call it a night
[call it a night]  {v. phr.}
To declare that an evening party or other activity conducted late in the day is finished.
I am so tired that I am going to call it a night and go to bed.


call it quits
[call it quits]  {v. phr.},  {informal}
1. To decide to stop what you are doing; quit.
When Tom had painted half the garage, he called it quits.
2. To agree that each side in a fight is satisfied; stop fighting because a wrong has been paid back;  […]

call names
[call names]  {v. phr.}
To use ugly or unkind words when speaking to someone or when talking about someone. — Usually used by or to children.
Bill got so mad he started calling Frank names. 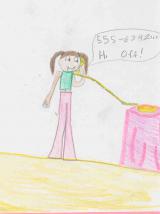 [call off]  {v.}
To stop (something planned); quit; cancel.
When the ice became soft and sloppy, we had to call off the ice-skating party.
The baseball game was called off because of rain.

call on
[call on] or [call upon]  {v.}
1. To make a call upon; visit.
Mr. Brown called on an old friend while he was in the city.
2. To ask for help.
He called on a friend to give him money for the busfare to his home.