bark up the wrong tree 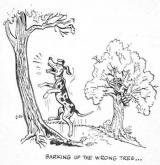 barn
[barn]
See: [LOCK THE BARN DOOR AFTER THE HORSE IS STOLEN].

barrel
[barrel]
See:
[OVER A BARREL] also [OVER THE BARREL],
[SCRAPE THE BOTTOM OF THE BARREL].

base on balls
[base on balls]  {n.}
First base given to a baseball batter who is pitched four balls outside of the strike zone.
He was a good judge of pitchers and often received bases on balls.

basket
[basket]
See: [PUT ALL ONE'S EGGS IN ONE BASKET].

basket case
[basket case]  {n.},  {slang},  {also informal}
1. A person who has had both arms and both legs cut off as a result of war or other misfortune.
2. A helpless person who is unable to take care of himself, as if carted around in a basket by others.
* /Stop  […]

an expression "whose meaning is not predictable from the usual meanings of its constituent elements… or from the general grammatical rules of a language"
Recent updates
Zimbabwe saying
You don't have to be faster than the lion, you only have to be faster than the slowest guy.
pack a punch
[pack a punch] or [pack a wallop] {v. phr.}, {slang} 1. To be able to give a powerful blow; have a dangerous fist. * /He  […]
potshot
[potshot] {n.} A direct shot at an easy, stationary target from behind a protected position or camouflage; criticism. *  […]
catch with one's pants down
[catch with one's pants down] {v. phr.}, {slang} To surprise someone in an embarrassing position or guilty act. * /They  […]
in one's minds eye
[in one's mind's eye] {adv. phr.} In the memory; in the imagination. * /In his mind's eye he saw again the house he had  […]
Joyce Armor, TV screenwriter
Think of stretch marks as pregnancy service stripes.
Y
Quizzes on idioms starting with Y