bear a grudge
[bear a grudge]  {v. phr.}
To persist in bearing ill feeling toward someone after a quarrel or period of hostility.
Come on, John, be a good sport and don't bear a grudge because I beat you at golf.
Contrast: [BURY THE HATCHET].

bear down
[bear down]  {v.}
1. To press or push harder; work hard at; give full strength and attention.
She is bearing down in her studies to win a scholarship.
The baseball pitcher is bearing down.
The pitcher bore down on the star batter.
*  […]

bear down on
[bear down on] or [upon]  {v. phr.}
To draw constantly nearer with great speed and force.
The police cars were bearing down on the bank robbers' get-away car. 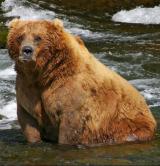 
bear in the air 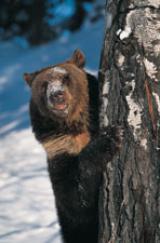 [bear in the air] or [bear in the sky]  {n. phr.},  {slang},  {citizen's band radio jargon}
A police helicopter flying overhead watching for speeders.
Slow down, good buddy, there's a bear in the air.

bear out
[bear out]  {v.}
To show to be right; prove; support.
Modern findings do not bear out the old belief that the earth is flat.
Seward's faith in his purchase of Alaska was borne out, even though it was once called "Seward's Folly."

an expression "whose meaning is not predictable from the usual meanings of its constituent elements… or from the general grammatical rules of a language"
Recent updates
local yokel
[local yokel] {n.}, {slang}, {citizen's band radio jargon} City police officer, as opposed to state police or highway patrol.  […]
out of the picture
[out of the picture] {adv. phr.} No longer a possibility or in the running; rejected. * /Mark assured Carol that his ex-wife  […]
Albert Einstein
The secret to creativity is knowing how to hide your sources.
see better days
[see better days] {v. phr.} 1. To enjoy a better or happier life. * /Mr. Smith is poor now, but he will see better days./  […]
Zenna Schaffer
Give a man a fish and he has food for a day; teach him how to fish and you can get rid of him of the entire weekend.
YGM
[YGM] "You've got mail"
in one's tracks
[in one's tracks] {adv. phr.}, {informal} 1. Just where one is at the moment; abruptly; immediately. * /The hunter's rifle  […]
That's the story of my life...
[That's the story of my life...] Usually spoken when something goes wrong. * /I spent seven years writing a novel, but no  […]