Idioms beginning with "U"


under one's heel
[under one's heel]  {adv. phr.}
In one's power or control.
If one marriage partner always wants to keep the other person under his or her heel, it is not a happy or democratic arrangement and may lead to a divorce. 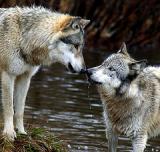 [under one's nose] or [under the nose of]  {adv. phr.},  {informal}
In sight of; in an easily seen or noticeable place.
The thief walked out of the museum with the painting, right under the nose of the guards.
* /When Jim gave up trying to find a  […]

[under one's thumb] or [under the thumb]  {adj.} or  {adv. phr.}
Obedient to you; controlled by you; under your power.
The Jones family is under the thumb of the mother.
Jack is a bully. He keeps all the younger children under his thumb.
* /The  […]


under one's wing
[under one's wing]  {adv. phr.}
Under the care or protection of.
Helen took the new puppy under her wing.
The boys stopped teasing the new student when Bill took him under his wing.
Compare: [IN TOW].

under orders
[under orders]  {adv. phr.}
Not out of one's own desire or one's own free will; obligatorily; not freely.
* /"So you were a Nazi prison guard? " the judge asked. "Yes, your Honor," the man answered, "but I was acting under orders and not because I  […]

under protest
[under protest]  {adv. phr.}
Against one's wish; unwillingly.
"I'll go with you all right," she said to the kidnapper, "but I want it clearly understood that I do so under protest."

an expression "whose meaning is not predictable from the usual meanings of its constituent elements… or from the general grammatical rules of a language"
Recent updates
big top
[big top] {n.} The main tent under which a circus gives its show; the circus and circus life. * /Lillian Leitzel was one of  […]
on schedule
[on schedule] (1) {adv. phr.} As planned or expected; at the right time. * /The school bus arrived at school on schedule./  […]
Brad Osberg
10 fingers...10 toes. Aw, crap! I'm metric!
Chainsaw Consultant
[Chainsaw Consultant] An outside expert brought in to reduce the employee head count, leaving the top brass with clean hands.
Idioms to Learn Today
Flashcard learning set.Check yourself now!Try flashcard test by definitions or by descriptions.Set includes the following  […]
Mark Twain
(1835-1910) Water, taken in moderation, cannot hurt anybody.
bogroll
[bogroll] {n.} Toilet paper.

Forvo.com - Listen How the Word is Pronounced
Great resource to learn how the word you want to learn gets pronounced in different countries and even regions. You will be  […]