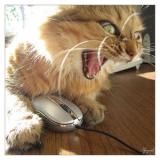 [game is up] or  {slang} [jig is up]
The secret or plan won't work; we are caught or discovered.
The game is up; the teacher knows who took her keys.
The jig's up; the principal knows the boys have been smoking in the basement.
Compare: [FAT  […]

gang up on
[gang up on] or [gang up against]  {v. phr.},  {informal}
To jointly attack someone, either physically or verbally; take sides in a group against an individual.
* /The class bully was stronger than all the other boys, so they had to gang up on him to put  […]

garbage down
[garbage down]  {v. phr.},  {slang}
To eat eagerly and at great speed without much regard for manners or social convention.
The children garbaged down their food.

gas up
[gas up]  {v.},  {informal}
1. To fill the gasoline tank of.
The mechanics gassed up the planes for their long trip.
2. To fill the tank with gasoline.
The big truck stopped at the filling station and gassed up.