dangerous
[dangerous]
See: [A LITTLE KNOWLEDGE IS A DANGEROUS THING].

dare say
[dare say]  {v. phr.}
To think probable; suppose; believe. — Used in first person.
Mary is unhappy now but I dare say she will be laughing about this tomorrow.
* /There is no more ice cream on the table, but I dare say we can find some in the  […]

dark horse
[dark horse]  {n.},  {informal}
A political candidate little known to the general voting public; a candidate who was not expected to run.
Every once in a while a dark horse candidate gets elected President.


dark of the moon 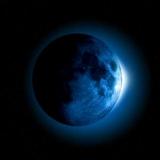 [dark of the moon]  {n. phr.},  {literary}
A time when the moon is not shining or cannot be seen.
It was the dark of the moon when the scouts reached camp and they had to use flashlights to find their tents.
Contrast: [FULL OF THE MOON].

darken one's door
[darken one's door] or [darken the door]
To appear, as in a doorway; enter someone's home or establishment. — Used in negative imperative sentences especially with "never" and "again".
If you leave this house now, never darken my door again.
*  […]

dash light
[dash light]  {n.}
A light on the front inside of a car or vehicle.
Henry stopped the car and turned on the dash lights to read the road map.

21 English Accent within 3 Minutes
Listen to these brilliant self introductions in 21 English accents.
come to a dead end
[come to a dead end] {v. phr.} To reach a point from which one cannot proceed further, either because of a physical obstacle  […]
ease off
[ease off] or [ease up] {v.} To make or become less nervous; relax; work easier. * /When the boss realized that John had  […]
in a pickle
[in a pickle] {adv. phr.}, {informal} In a quandary; in a difficult situation. * /I was certainly in a pickle when my front  […]
come up smelling like a rose
[come up smelling like a rose] {v. phr.} To escape from a difficult situation or misdeed unscathed or without punishment. *  […]
see eye to eye
[see eye to eye] {v. phr.} To agree fully; hold exactly the same opinion. * /Though we did not usually agree, we saw eye to  […]
Noelie Altito
The shortest distance between two points is under construction.