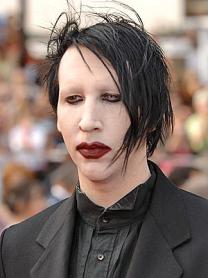 Get site updates @:
See as well
laugh one's head off
[laugh one's head off] {v. phr.}, {informal} To laugh very hard; be unable to stop laughing. * /Paul's stories are so wildly funny that I laugh my head off whenever […] A Dictionary of American Idioms

Marilyn Manson
I view my job as being someone who is supposed to piss people off. I don't want to be just one-of-the-guys. I don't want to be just a smiling face […] www.english-slang.com
laugh up one's sleeve
[laugh up one's sleeve] or [laugh in one's sleeve] or [laugh in one's beard] To be amused but not show it; hide your laughter. * /He was laughing up his […] A Dictionary of American Idioms
canned laughter
[canned laughter] {n.}, {informal} The sounds of laughter heard on certain television programs that were obviously not recorded in front of a live audience and are played for the benefit […] A Dictionary of American Idioms

an expression "whose meaning is not predictable from the usual meanings of its constituent elements… or from the general grammatical rules of a language"
Recent updates
Mark Twain
(1835-1910) Water, taken in moderation, cannot hurt anybody.
bogroll
[bogroll] {n.} Toilet paper.

Forvo.com - Listen How the Word is Pronounced
Great resource to learn how the word you want to learn gets pronounced in different countries and even regions. You will be  […]
Idioms to Learn Today
Learn/refresh your knowledge against this set!Then check yourself by running flashcard test by definitions or by descriptions.
Christmas card
[Christmas card] {n.}, {slang}, {citizen's band radio jargon} A speeding ticket. * /Smokey just gave a Christmas card to the  […]
overhead
[overhead] {n.} Expenses incurred in the upkeep of one's plant and premises, employees' salaries, etc., which are not due to  […]
elbow one's way into
[elbow one's way into] or [out of] {v. phr.} To force entry into a place by using one's elbows. * /The bus was so crowded  […]
go to any length
[go to any length] {v. phr.} To do everything you can. * /Bill will go to any length to keep Dick from getting a date with  […]