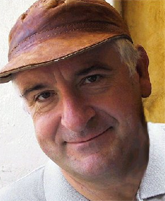 Douglas Adams was born in Cambridge, England, in 1952. He was educated at Cambridge University, and was active in the Footlights Dramatic Club, a springboard for many British comics. At least some of the this time was spent hitchhiking across Europe because in 1971 he found himself in Innsbruck, Austria, lying in a field -- drunk -- thinking how much better life would be if there was a guide to hitchhiking across the galaxy. Adams graduated in 1974, and eventually hooked up with producer Simony Brett, leading to the debut of The Hitchhiker's Guide to the Galaxy on BBC Radio in 1978.
Adams turned The Hitchhiker's Guide to the Galaxy into a book in 1979, followed by sequels The Restaurant at the End of the Universe in 1980 and Life, the Universe and Everything in 1982, making it a trilogy. Because Adams had incredibly great taste, he teamed up with Steve Meretzkey to turn his work into interactive fiction, and in 1984 Infocom released The Hitchhiker's Guide to the Galaxy. Another sequel to the trilogy, So Long, and Thanks for All the Fish was also released that year.
Other books include The Meaning of Liff, The Deeper Meaning of Liff, Last Chance to See, and two Dirk Gently novels (Dirk Gently's Holistic Detective Agency and The Long Dark Tea-Time of the Soul). Another Hitchhiker novel appeared in 1992 (Mostly Harmless), and the sixth book of the "trilogy" is expected to be released posthumously in 2002 (Salmon of Doubt: Hitchhiking the Galaxy One Last Time).
Adams also authored the interactive fiction game Bureaucracy in 1987 and the computer game Starship Titantic in 1998.
Douglas Adams was a well-known Infocom fan, Mac fanatic, computer enthusiast, and all-around damn funny guy. He died suddenly on May 11, 2001 of an apparent heart attack. He will be missed.
No categories:


Douglas Adams
(1952—2002), SF author
Humans are not proud of their ancestors, and rarely invite them round to dinner.

Douglas Adams
(1952—2002)
British SF writer
The art of flying is to throw yourself at the ground and miss.

Douglas Adams, Mostly Harmless
Nothing travels faster than light, with the possible exception of bad news, which follows its own rules.

Douglas Adams, "The Hitchhiker's Guide to the Galaxy"
Anyone who is capable of getting themselves made President should on no account be allowed to do the job.

an expression "whose meaning is not predictable from the usual meanings of its constituent elements… or from the general grammatical rules of a language"
Recent updates
for the life of one
[for the life of one] {adv.}, {informal} No matter how hard you try. - Used for emphasis with negative statements. * /I  […]
sign of the times
[sign of the times] {n. phr.} A characteristic of the times in which one lives. * /It is a sad sign of the times that all  […]
Irvin S. Cobb
(1876-1944) U.S. humorist If writers were good businessmen, they'd have too much sense to be writers.
E
Quizzes on idioms starting with E
Pandoras box
[Pandora's box] {n. phr.}, {literary} A thing or problem that, if activated, will give rise to many unmanageable problems. *  […]
write home about
[write home about] {v. phr.} To become especially enthusiastic or excited about; boast about. - Often used after "to". *  […]
Napoleon Bonaparte
(1769-1821) I like convents, but I wish they would not admit anyone under the age of fifty.