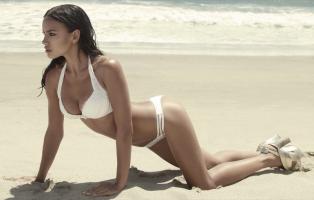 beach bunny  {n.},  {slang}
An attractive girl seen on beaches — mostly to show off her figure; one who doesn't get into the water and swim.
What kind of a girl is Susie? — She's a beach bunny; she always comes to the Queen's Surf on Waikiki but I've never seen her swim.
Compare: attention whore
Categories:noun slang
Source: A Dictionary of American Idioms

fish out of water

other fish to fry

in the swim  {adj. phr.}
Doing the same things that other people are doing; following the fashion (as in business or social affairs); busy with what most people are doing.
Jim found some college friends at the lake that summer, and soon was in the swim of things.
Mary went to New York with introductions to writers and artists, and that winter she was quite in the swim.
Contrast: OUT OF THE SWIM.
Categories:adjective
Source: A Dictionary of American Idioms

out of the swim

out of the swim  {adj. phr.}
Not doing what others are doing; not active in business or social affairs.
Mary had to stay home and take care of Mother while she was sick, and soon felt out of the swim.
The toy manufacturer who is out of the swim will lose money.
Contrast: IN THE SWIM.
Categories:adjective
Source: A Dictionary of American Idioms

sink or swim  {v. phr.}
To succeed or fail by your own efforts, without help or interference from anyone else; fail if you don't work hard to succeed.
When Joe was fourteen, his parents died, and he was left by himself to sink or swim.
Tom's new job was confusing and no one had time to help him learn, so he had to sink or swim.
Categories:time verb
Source: A Dictionary of American Idioms

heart sink
To lose hope, courage, or eagerness; be very disappointed.
The soldiers' hearts sank when they saw that they were surrounded by Indians.
The children were happy because they were going to the beach to swim, but their hearts sank when it began to rain.
Source: A Dictionary of American Idioms

throw in the sponge

sink in or soak in  {v.},  {informal}
To be completely understood; be fully realized or felt.
Everybody laughed at the joke but Joe; it took a moment for it to sink in before he laughed too.
When Frank heard that war had started, it didn't sink in for a long time until his father was drafted into the army.
Compare: BRING HOME.
Categories:informal time verb
Source: A Dictionary of American Idioms

an expression "whose meaning is not predictable from the usual meanings of its constituent elements… or from the general grammatical rules of a language"
Recent updates
BBS
[BBS] "Be back soon", or "bulletin board system/service"
Don Addis
(1935--) U.S. editorial cartoonist Never play cat and mouse games if you're a mouse.
Listen to English - learn English!
The podcast website for people learning English The podcasts on this site will help you to improve your English vocabulary and  […]
Idioms to Learn Today
Learn/refresh your knowledge against this set!Then check yourself by running flashcard test by definitions or by descriptions.
charge something to something
[charge something to something] {v.} 1. To place the blame on; make responsible for. * /John failed to win a prize, but he  […]
pull up
[pull up] {v.} 1. To check the forward motion of; halt; stop. * /He pulled up his horse at the gate./ 2. To tell (someone)  […]
drown one's sorrows
[drown one's sorrows] or [drown one's troubles] {v. phr.}, {informal} To drink liquor to try to forget something unhappy. *  […]
mile markers
[mile markers] {n.}, {slang}, {citizen's band radio jargon} Small signs along interstate highways usually bearing a number.  […]