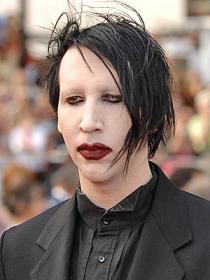 Get site updates @:
See as well
laugh one's head off
[laugh one's head off] {v. phr.}, {informal} To laugh very hard; be unable to stop laughing. * /Paul's stories are so wildly funny that I laugh my head off whenever […] A Dictionary of American Idioms

Marilyn Manson
I view my job as being someone who is supposed to piss people off. I don't want to be just one-of-the-guys. I don't want to be just a smiling face […] www.english-slang.com
laugh up one's sleeve
[laugh up one's sleeve] or [laugh in one's sleeve] or [laugh in one's beard] To be amused but not show it; hide your laughter. * /He was laughing up his […] A Dictionary of American Idioms
canned laughter
[canned laughter] {n.}, {informal} The sounds of laughter heard on certain television programs that were obviously not recorded in front of a live audience and are played for the benefit […] A Dictionary of American Idioms

an expression "whose meaning is not predictable from the usual meanings of its constituent elements… or from the general grammatical rules of a language"
Recent updates:
Albert Einstein
I don't know how man will fight World War III, but I do know how they will fight World War IV; with sticks and stones.
be hard on
[be hard on] {v. phr.} To be strict or critical with another; be severe. * /"Don't be so hard on Jimmy," Tom said. "He is  […]
tie up
[tie up] {v. phr.} 1. To show or stop the movement or action of; hinder; tangle. * /The crash of the two trucks tied up all  […]
chip on one's shoulder
[chip on one's shoulder] {n. phr.}, {informal} A quarrelsome nature; readiness to be angered. * /He went through life with a  […]
sit up with
[sit up with] {v. phr.} To be with; particularly to keep someone ill company. * /Mrs. Brown sat up with her sick husband all  […]
Cardinal de Retz
(1613-1679), French politician Nothing sways the stupid more than arguments they can't understand.
Off the beaten road
[off the beaten road] {adj. phr.} See: [off the beaten track]