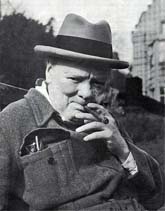 British politician and statesman known for his leadership of the United Kingdom during the Second World War (WWII).
He is widely regarded as one of the great wartime leaders. He served as Prime Minister twice (1940–45 and 1951–55). A noted statesman and orator, Churchill was also an officer in the British Army, a historian, a writer, and an artist.
No categories:


Winston Churchill
A lie gets halfway around the world before the truth has a chance to get its pants on.

Winston Churchill
For myself I am an optimist — it does not seem to be much use being anything else.

Winston Churchill
History will be kind to me for I intend to write it.

Winston Churchill
I have always felt that a politician is to be judged by the animosities he excites among his opponents.

Winston Churchill
It is a good thing for an uneducated man to read books of quotations.

Winston Churchill
When the eagles are silent, the parrots begin to jabber.

Winston S. Churchill
(1874—1965)
English Prime Minister
I like pigs. Dogs look up to us. Cats look down on us. Pigs treat us as equals.

an expression "whose meaning is not predictable from the usual meanings of its constituent elements… or from the general grammatical rules of a language"
Recent updates:
Oscar Levant
(1906-- ), TV personality in US There is a thin line between genius and insanity. I have erased that line.
J
Quizzes on idioms starting with J
Gray Matter
[Gray Matter] Older, experienced business people hired by young entrepreneurial firms trying to appear more professional and  […]
Idioms to Learn Today
New Reading / Flip-Card (learning) set has been shared.Check yourself now! Run flip-cards by definitions or by descriptions.
out on bail
[out on bail] {adv. phr.} Released from prison because a security deposit known as "bail" has been put up by an individual or  […]
rub out
[rub out] {v.}, {slang} To destroy completely; kill; eliminate. * /The gangsters rubbed out four policemen before they were  […]
Dan Bennett
U.S. columnist An elected official is one who gets 51 percent of the vote cast by 40 percent of the 60 percent of voters who  […]
L
Quizzes on idioms starting with L