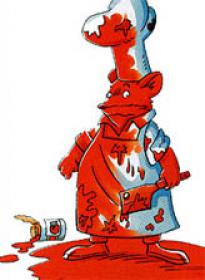 .
catch up  {v.}
1. To take or pick up suddenly; grab (something).
She caught up the book from the table and ran out of the room.
2. To capture or trap (someone) in a situation; concern or interest very much. — Usually used in the passive with "in".
The Smith family was caught up in the war in Europe and we did not see them again till it was over.
We were so caught up in the movie we forgot what time it was.
Compare: MIX UP.
3. To go fast enough or do enough so as not to be behind; overtake; come even. — Often used with "to" or "with".
Johnny ran hard and tried to catch up to his friends.
Mary missed two weeks of school; she must work hard to catch up with her class.
Compare: UP TO.
4. To find out about or get proof to punish or arrest. — Usually used with "with".
A man told the police where the robbers were hiding, so the police finally caught up with them.
5. To result in something bad; bring punishment. — Usually used with "with".
The boy's fighting caught up with him and he was expelled from school.
Smoking will catch up with you.
Compare: CHICKENS COME HOME TO ROOST.
6. To finish; not lose or be behind. — Used with "on" and often in the phrase "get caught up on".
Frank stayed up late to get caught up on his homework.
I have to catch up on my sleep.
We caught up on all the latest news when we got back to school and saw our friends again.
Syn.: KEEP UP.
Categories: catch time used in passive verb
Source: A Dictionary of American Idioms

'catch up' on video

an expression "whose meaning is not predictable from the usual meanings of its constituent elements… or from the general grammatical rules of a language"
Recent updates:
chain-smoke
[chain-smoke] {v.} To smoke cigarettes or cigars one after another without stopping. * /Mr. Jones is very nervous. He  […]
clamp down
[clamp down] {v.}, {informal} To put on strict controls; enforce rules or laws. * /After the explosion, police clamped down  […]
Charles IX
(1550-1574) Horses and poets should be fed, not overfed.
Mary Pettibone Poole
"He who laughs, lasts."
dekko
[dekko] Look. From the Hindi, dekho.
Idioms to Learn Today
Flashcard learning set.Check yourself now!Try flashcard test by definitions or by descriptions.Set includes the following  […]
eat crow
[eat crow] {v. phr.} To admit you are mistaken or defeated; take back a mistaken statement. * /John had boasted that he  […]
way
[way] See: [ALL THE WAY] or [THE WHOLE WAY], [BY THE WAY], [BY WAY OF], [COME A LONG WAY], [CUT BOTH WAYS] or [CUT TWO  […]